Muay thai boxer and fitness freak, academia and explorer, freelance photographer and journalist, trainer, fighter and a danish expat in Ireland. Some days more one thing than the others. In here you'll find my take on training, random thoughts about living abroad and life in general, but mostly about training, fighting, teaching

Except for my poor elbow being beat up, morning training was a delight!
Shadow box
Push ups
Shadow box w/ weights
3 round pad work: Elbow, Knees & punch/kick (same side)
Abs and back
+ Ido Portale movements with Pernille. Pernille did Ido Portale’s movement camp in Singapore, and has generously offered to share a bit of all the stuff she learned. Today we tried 6 different ‘crawls’*, which were all super challenging: Working on balance, coordination and mooooovement. Really fun and exciting. Definitely going to continue with these and when I feel secure in them, I’ll try to pass it on.

6 ‘crawls’ – as best I can describe them:
**2x rolls – one ‘normal’ and one landing on the heels with open legs
*One crawl with only 1 hand/ 1 foot on the floor at the same time. Sounds easy, but you’ll have to think and coordinate to make it work
*Same crawl as above, but with push ups and partner setting the distance. (Partner showing where to set the next hand – when the hand lands, you do a push up. Move leg before hand at the movements).
*Open chest crawl: Yoga position with one foot and opposite hand forward. Other leg far back and other arm straight above head – Open
chest. Lift hind leg, set hand down as far forward as you can, turn sideways on first foot (which are already in the floor) – lift other knee to the chest  and put up other arm straight above head
*Frog crawl: Start in squat position, put your right hand out in front of your left knee, and follow up with your left hand (next to right). Jump to the left, by putting your weight on your arms, and jump with the right leg going in front of your body. Land with your left leg straight and right leg in squat. Lift your hands and get into the squat position again.

Well – I’m actually a few days late. I know!! (last entry is from Saturday and today is Tuesday). Once again I ran out of internet and didn’t get around to it, until today. So I’m just gonna pick up the puck from where I left it – even I know, I’m probably about 5 days behind at this point! (My appologies, if you’re following the 100days challenge).

Lot’s of joy this morning! First time in 2 weeks, I made it to Mikenta’s morning class. It was really good, with headcoach and owner Brian Tallerik as the captain. Lot’s of padwork, followed by 4 rounds of bagwork. Worked with a very young girl (Anna) and had a good time. I’ve really come to love Brian’s classes, as I always seem to be learning a bit new and get inspired to better myself, and ofcourse, as always in the back of my mind: I’m thinking of what and how to bring it back to my girls in Ireland.

And last joy but not least: I got a Cross training class tonight in Fresh Fitness
I really look forward to teach a class again and I’m pretty sure, it’ll be a good class. Have planned 3 rounds with various exercises of different difficulties and challenges. But!! The best plans can easily change when it comes to classes; more people need more stations – less people might benefit from following each other. We’ll see! 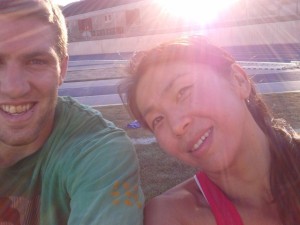 Liam and I after sprints at Østerbro Stadium (Never seen so many fit people at a track before! Ireland – you’re lacking behind!!!)

Can’t get online on my laptop tonight so sitting with a tiny nokia screen and pressing small buttons.

As much as I love technology, it can have Its bad days as well.

Training this morning: Getting some what killed by Brian Tallerik in Mikenta.
Knees, elbows, rubberbands and Lots of sprints. Loved it.

The famous quote from Batman – or rather Alfred, when trying to explain evil caused by men, that couldn’t be explained by greed, fear, rage, anger, revenge, lust or love. I remember hearing that sentence and it really stuck a chord with me.
How do you react to people’s action, when you can’t understand the background for them. When nothing gives meaning and can’t be comprehended by the normal means of understanding.

I don’t know how that feeling is, and I don’t know anyone, who just want to watch the world burn. People I know, can occasionally act, like they don’t give a care about anything or anyone. But there would always be a selfish reason behind the action. A desire to destroy out of anger, greed or another strong emotion.

All the strong desires for destruction I’ve felt in my life, have been born out of situations that have caused my emotions to escalate. My guess would be, that men with want to burn down their world, would have no such thing as emotions to disturb their path.
I don’t know, if you could call the joker emotionless, but he sure wanted chaos for chaos.

Sometimes, I think it would be nice, not to think, feel or worry about today, tomorrow or ever – and kind of just live to watch the world blossom (rather than burn) – but I’m not sure if the process is reversible? Could you be a (wo)man who just want to see the world come alive?
Training day (if anyone cares):
2 x Thai boxing (Mikenta and Butchers Fight Gym) 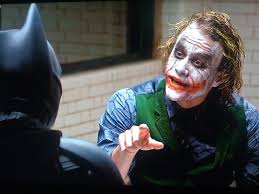