Muay thai boxer and fitness freak, academia and explorer, freelance photographer and journalist, trainer, fighter and a danish expat in Ireland. Some days more one thing than the others. In here you'll find my take on training, random thoughts about living abroad and life in general, but mostly about training, fighting, teaching

This afternoon we visited Christiania for a short time, and I actually saw my first ever ‘Synthol’ guy. I also saw a guy in a small sequined dress, but that’s a common affair. Synthol injections in the muscles – I actually thought guys were too smart for stuff like that, at least since Gregg Valentino appeared in ‘The man who’s arms exploded’.
At least I didn’t expect to ever see a pair of synthol arms in nice, quiet, educated Copenhagen. But there they were – coming towards me. Sitting on the shoulders of an angry-looking man. The kind with neck tattoos and a look that tells you, if you look at him a half a minute too long, you won’t be looking at anything but dirt for the next 15 minutes – while getting beat to shit. (However – there is that question on whether he would be able to use his synthol arms or not!!)

I was very surprised to see him, but then I came home and saw this (see photo below) posted on Facebook, and I realized that men are under a lot of pressure from the media – the fashion – the rich and famous to look their best. Just as women have been for decades.
To be honest from all my years of training stuff, I guess, I’ve been used to being around fit guys, and I never really thought about how some men must struggle to live up to todays beauty ideal of the male body. At most I’ve heard guys complaining about weight loss when they were getting ready for fights – but never actually heard anyone talk about the hard work on putting on muscles. (except for the guys already lifting tons, who are suffering from bigorexia ( muscle dysmorphia)).

Now, I don’t think the synthol guy injected his arms just to look sexy for us (the opposite sex). I think he just as much, wanted to look big and strong to scare – or demand respect from his peers. And in a way, I guess it’s the home (male) version of silicone and botox – just for men.
The beauty of men have changed as well as for women – and even it’s nice too look at abs and big strong legs, I’m not sure our ideals of beauty is for the better. Too much emphasis on the outside and not enough caring on what goes on inside. 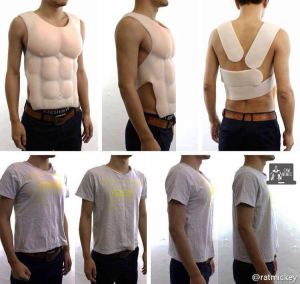 The male equivelant of the wonder bra

Days training: 8K
We’ve visited my parents this weekend, so instead of the lakes in Cph, we went for a run in the nearby forest. We had pretty good run – at least I think so. Pace was doable and half way in, we increased a bit, but I could still toggle along.
-As a fun surprise we caught a glimpse of the ‘Post Danmark rundt’ bicycle race, on the way back. It was a last-minute excuse to add a little extra to our run, that made it possible for us to cheer for a few seconds, while the riders stormed by. Hereafter it was back on the road for the last app. 1k back.

On the last 100m, I signaled to Liam to sprint back.. and he just took off. Usually I feel I can keep a distance to him, but today he just kept pulling away. Absolutely blown away!